HPCsharp library is a NuGet package, available on nuget.org, with source code on GitHub. Currently, it provides Insertion Sort, Merge Sort, and Radix Sort. Merge Sort has a parallel and a serial implementation. Parallel implementation perform substantially faster than sorting using parallel Linq. Radix Sort runs on a single core, at the moment, and competitive versus Array.Sort, List.Sort and even parallel Linq.

These sorting algorithms in HPCsharp provide the same familiar interfaces of the standard C# sorting, making it simple to check these out.

The above graph compares performance of parallel Linq sorting versus HPCsharp Parallel Merge Sort. The x-axis is the size of the UInt32 array being sorted. The y-axis is time in seconds it takes to sort that array. For example, parallel Linq takes 28 seconds to sort a 150 million element array, while HPCsharp parallel Merge Sort takes 1.4 seconds. This is a speedup of about 20 times, not 20%, but 20 times faster.

Parallel Merge Sort is not limited to only sorting arrays of integers, but can sort arrays and lists of user defined classes – in general any type that can be compared. You can provide your own comparison method. The sort is also stable, whereas C# built-in sort for arrays and lists is not. Linq sort can be stable when .AsStable is used.

Serial implementation of Merge Sort is also provided, which is slower than C# Array.Sort and List.Sort, but is faster than Linq sort, serial and parallel. In this case, Merge Sort is using a single core, while parallel Linq is using all cores on a quad-core CPU, and serial Merge Sort is faster. 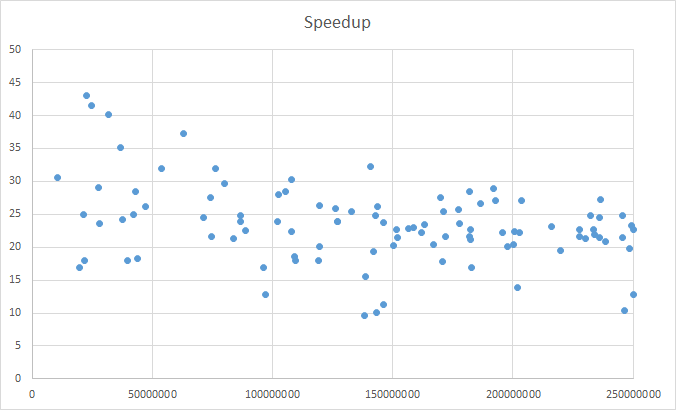 C# Array.Sort and List.Sort uses a hybrid sorting algoritm called introspective sort, which is a mixture of Insertion Sort, Heap Sort and Quicksort. “This implementation performs an unstable sort; that is, if two elements are equal, their order might not be preserved. In contrast, a stable sort preserves the order of elements that are equal. On average, this method is an O(n log n) operation, where n is Count; in the worst case it is an O(n ^ 2) operation” (msdn).

I’ll describe a library of sorting algorithms that has been developed over the last few years, which can sort faster while using a single CPU core, or multiple cores.

19 thoughts on “Faster Sorting in C#”

I love all kinds of algorithms, especially ones that parallelize. I used to write a column for Dr. Dobb's Journal on high performance and parallel algorithms. This blog is its continuation...
%d bloggers like this: