Every programming language provides methods for generating random numbers, because random numbers are useful in so many situations. For years the C programming language only provided the rand() function, which generates 15 random bits per function call. To generate a 32-bit integer, it takes 3 calls to rand() to accumulate 32 bits. On my quad-core sub-$1,000 laptop using rand() to generate an array of 500 Million integers runs at:

C++ added a rich and modern set of methods for generating different types of random numbers with variety of statistical distributions. The good old rand() function is still there for backward compatibility, with its poor statistical characteristics. It has been deprecated, replaced by the much richer, more capable set of random generation functions using a variety of algorithms. Let’s check out capabilities and performance of these functions, generating a uniform distribution (0.0 to 1.0 for floating-point, and -2 billion to 2 billion for 32-bit integers).

C++ also added support for a standard way to access hardware based entropy generators, if its available on the processor. Performance will vary from processor to processor, with the following measurements on my laptop:

Intel has developed two powerful accelerated algorithms libraries: Integrated Performance Primitives (IPP) and Math Kernel Library (MKL). These libraries use data-parallel processor instructions to accelerate computation. These libraries provide accelerated pseudo-random number generator algorithms. MKL algorithms are not multi-threaded, but provide support for use in multi-threaded code. The following graph shows performance measurements of some of them. Performance was measured with a single channel of system memory, with algorithms running on a single core: 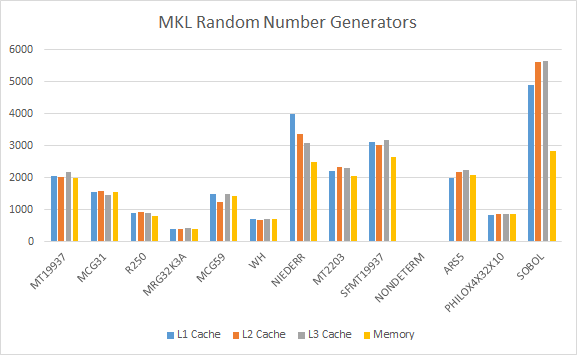 Note that for some algorithms, such as NIEDERR and SOBOL, performance is significantly higher when the array is in cache. For NIEDERR algorithm, performance drops progressively as the array gets bigger. These benchmarks were performed on a laptop with with dual-channel DDR4 system memory. Notice the significantly higher performance level versus the previous table which was measured on the same laptop with a single channel of DDR4 system memory. These algorithms ran on a single core of a quad-core processor. The faster algorithms are limited by system memory bandwidth to slightly under 3 GigaFloats/sec when using arrays larger than cache memory.

“If the original test case did not instantiate the pages for the 500 million element array (e.g., as was done with the memset() call), then the time required for the first MKL call will include the time for the OS to instantiate those pages.   This can be a significant overhead — the actual cost depends on the OS, the processor family, the number of processors, etc.”

It is not fair to include the operating system overhead for creating and paging in an array in the benchmarks of the random number generation algorithms. For this reason the benchmarks show the performance based on the array already pre-allocated and already in system memory. However, as users of variety of algorithms we need to be aware of such situations.

My Dr. Dobb’s article “Quality of Random Numbers versus Performance”, which shows the issue with C++ rand() function statistically and graphically. Zoom in on the images to see patterns, which indicate lack of randomness.

I love all kinds of algorithms, especially ones that parallelize. I used to write a column for Dr. Dobb's Journal on high performance and parallel algorithms. This blog is its continuation...
Loading Comments...
%d bloggers like this: